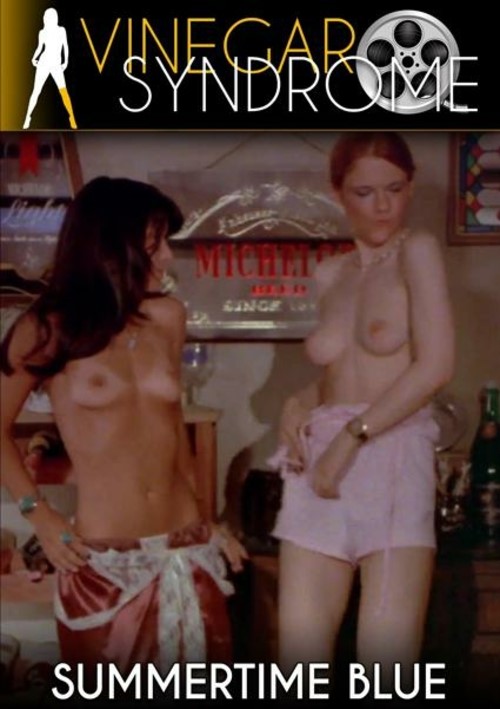 Summertime Blue
The lesser of the two pictures, this one starts off with a prolonged scene where two girls, Holly (Arcadia Lake) and Janice (Lynda Mantz), dance around to the latest hit disco record. It's the last day of summer and they intend to see the season out with a bang. Of course, this means they strip down and get involved in some lesbian action (complete with a double-ended dong that Holly tells her friend she's borrowed from her dad, who brought it back with him on a trip to Europe!), unaware that their boyfriends, George (Eric Edwards) and Danny (Ron Hudd), are outside watching through the window, taking pictures. Once the girls finish up, the guys come in, drink some Coors, and they all get to talking. Before they inevitably all have sex, we hear a few stories about some exploits that occurred over the summer. See, George has been working on his photography skills all summer, which led to a group grope with Samantha Fox, Bethana and Roger Caine. It also led to his spying on a guy named John (John Holmes), dubbed Captain Tongue to those who know him well, as he plays around with a lovely lady named Candy Johnson (Serena). Sufficiently fired up, Edwards boffs Lake and Hudd sticks it to Mantz, after which we're treated to another scene with Holmes and Serena and then the finale with Edwards' brother caught in bed with an unidentified black girl! This basically feels like a loop carrier with the main 'story' involving our four friends connecting the otherwise unrelated scenes. As such, there's really not much here in the way of plot at all. The movie has some points, however. Lake and Edwards, a real life couple at one point, have good chemistry here and the scenes with Holmes and Serena are solid. Mantz falls flat here, she's dopey looking and looks kind of out of it but if this is far from essential viewing neither is it a complete waste of time. Interestingly enough, Roberta Findlay appears to have been the cinematographer on this, credited as Anna Riva.