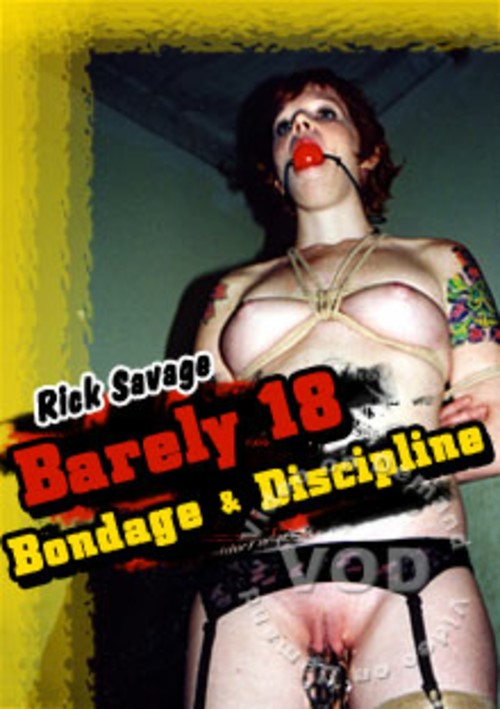 Rick Savage Barely 18 Bondage &amp; Discipline
18-year-old redhead Madison has graduated high school and needs a job. She enjoys a good spanking so she decides to audition for a job in a professional dungeon. And who better to put her to the test, than the wicked Master Rick Savage. He explains that total submission is essential to be a slave in the dungeon. She demonstrates obedience by removing her skirt and blouse when told to strip. Madison is ordered to kneel and pull her panties down. She obeys. She is told to press one hand against her pussy, close her eyes and tell the camera why she thinks she would make a good dungeon slave. The young lady tells us she likes pain, she likes being told what to do. She says her boyfriend put her in bondage and she loved it, and she loves being submissive. Madison is permitted to rise and is now instructed to lie across Master's lap for a good, old fashioned over the knee spanking. Her girlish buns jiggle as Savage spanks her white cheeks to a nice shade of crimson. After a hard spanking, she is told to stand and remove her bra. Rope bondage is used to secure Madison's arms behind her back and pull her elbows together. This causes her gorgeous natural tits to jut forward nicely. After blindfolding his new submissive, Master Rick Savage now engages in his FAVORITE kind of tease, bare-handed tit tease. The savage one stands behind his young slave and squeezes deeply into her tit-flesh causing his 18-year-old subject to cry out and moan so beautifully. He presses deeply, rubbing the tit-gland against her rib cage. Madison's tits bulge between Savage's strong hands as he administers an especially harsh dose of tit tease. Finally, the pain is too much and our young slave ACTUALLY passes out, collapsing to the floor. THIS IS NOT FAKED! This young beautiful slave ACTUALLY passed out from the intensity of her tit tease. After a brief rest, Madison insists that she wants to continue her slave audition. Madison's B&D test resumes with more rope bondage encasing her wonderful boobs and securing her hands behind her back again. After stuffing a ball gag into her mouth, Savage pulls her panties down to her ankles revealing a cute, totally shaved pussy. A clover clamp is now affixed to each shaved labia. The camera zooms in close giving us a fantastic view of each pussy lip stretching as Master attaches fishing weights to each clamp. B&D enthusiasts know that as you pull on clover clamps, they pinch tighter. So, the weights now cause the clamps to bite deeper into Maddy's bald pussy lips. Her submissive nature is quite evident when she obediently rocks her hips to swing the weights, essentially giving herself more pain. And then....master has one more delightfully devious pussy tease surprise for his potential slave. Next Madison is affixed to a reclining tease table, ball gag still in place, where her tender inner thighs and shaved pussy experience the wrath of Master Rick's riding crop. His hands cannot resist squeezing her succulent natural boobs, so more tit pain is on the menu. Including having her nipples and breasts flogged with a rubber flogger AND a leather flogger. The flogger expands its' field as it smacks the soft flesh of her tummy, and her shaved pussy. After a vicious tit-whipping, it's more bare-handed breast punishment as Savage administers a sound tit spanking. Finally, the coup de gras of tit tease as sturdy wooden clothespins, connected by pieces of twine, are attached to Madison's soft breasts. Our young slaves B&D audition will now include a tit zipper. After allowing the clothes pins to remain on the breasts until the pain is throbbing, Savage suddenly yanks on the twine, ripping the clothespins away from her tit flesh. Madison SCREAMS in pain. But when she calms down...she wants her audition to continue. For her final test, our young slave, totally nude, except for her stockings and high heels, is blindfolded and laid on her back on a wooden tease table. Her head and hands are placed in stocks, a spreader bar holds her legs wide open, her shaved pussy now totally vulnerable. Savage lights his favorite red candle. And WHY is this candle his favorite? Different candles have different melting temperatures. The master now tests his young slave's flesh with his absolute hottest candle. As the candle drizzles the entire length of her body....her breasts, her nipples, her soft tummy, her pussy, her inner thighs, our young slave treats us to a symphony of loud, piercing screams. This is one candle waxing that will take your breath away. Does 18-year-old Madison pass her B&D test? Watch. And you be the judge.